Big Bear Lake — decisive action in the form of an appeal through congressional representatives and the office of the secretary of the interior, Still working a Dell was taken last night by the Pioneer Loop Association in the matter of improvement of the old Pioneer Pass Road.

Representatives from Apple Valley, Banning, Pioneertown, Morongo Valley, Desert Hot Springs, San Bernardino and Big Bear Valley met in Big Bear Lake to hear the reading of bylaws previously adopted, and to pass a motion for distribution of a petitioning letter to be sent to all chambers of commerce in the desert and mountain areas for signatures of both chambers and their local civic and service organizations.

Big Bear Valley representatives were appointed to set in motion incorporation proceedings immediately. All members present were instructed also to return to the executive committee a list of suggested candidates for offices in the projected corporation.

A reports of the nominating Committee Will be heard at the next meeting to be held in Apple Valley at a date to be announced by the Apple Valley chamber.

The Pioneer Pass Road, now traversable only by four-wheel drive vehicles, is mostly on federal land and is considered an invaluable link between Yucca – Palm Springs area to the mountains.

It constitutes also a saving of forty miles in the projected pioneer loop scenic drive, also to be publicized widely by the PLA. The road was formerly the old Butterfield Stage Road and has been improved but slightly since its construction in the 1800s. 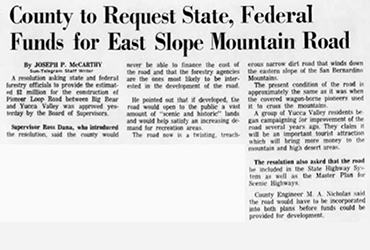 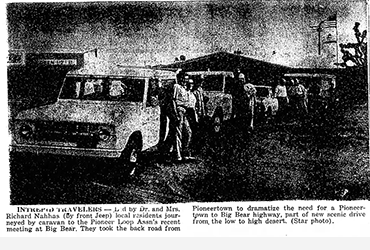 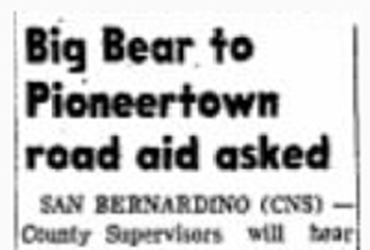