YUCCA VALLEY – A huge wildfire was edging toward San Bernardino National Forest Thursday, worrying fire officials that I could grow rapidly and get close to the resort community of Big Bear Lake and add to the nearly 100 structures it had already devoured.

A severe bark beetle infestation has killed many trees in the National Forest in recent years, and could provide the Sawtooth complex fire with substantial fuel.

“If it starts in there it will be almost impossible to stop,” said California Department of Forestry spokeswoman Karen Guillemin.

The blistering heat and strong winds that have made firefighting efforts difficult were not letting up, as forecasters expected 100 degree plus temperatures Thursday.

The fire, ignited during the weekend by lightning, had destroyed 42 houses, 55 other buildings and 91 vehicles in and around this high desert community 100 miles east of Lost Angeles, authorities said. As of late Wednesday, it had burned 37,000 acres.

Luckily, the historic building that made nearby Pioneertown famous, old western-style saloons and storefronts that once were props for movie cowboys like Gene Autry and Roy Rogers, were spared.

The fire was moving southwest, pushed by 10 mph winds and gusts between 25 and 40 mph. About 1,000 evacuees from Pioneertown, Burns Canyon, Rimrock, Gamma Gulch, Flamingo Heights and Little Morongo Canyon had not returned to their homes, said Capt. Marc DeRosier of the California Department of Forestry.

Eight firefighters and two civilians were treated for minor burns or smoke inhalation.

Smoke blanketed the sky over the Mojave Desert north of Yucca Valley. In the Gamma Gulch area scores of dead animals littered a property where a home and barn burned.

An evacuation center was set up at Yucca Valley High School, and horses and other livestock were taken to the town of Landers. 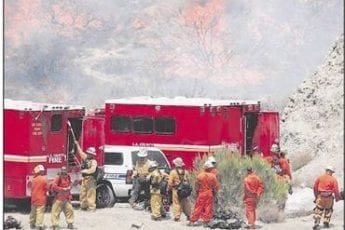 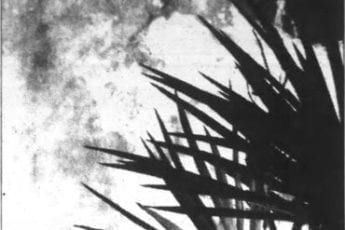 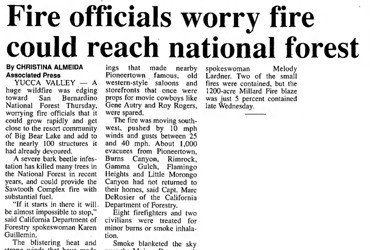