Willie Boy to Lead Natives Against the Whites

Washington Apprised of the Grave Situation.

[BY DIRECT WIRE TO THE TIMES.]

RIVERSIDE, Oct. 15.—[Exclusive Dispatch.]       Sheriff Wilson, who is heading an armed posse on the trail of Willie Boy, sent word tonight, in a note by an Indian runner, to the effect that he has found sure proof that the Indians are planning an uprising.

It is stated that five Indian agents between Palm Springs and Daggett and one near the Nevada line, have filed dispatches to Indian Commissioner Valentine at Washington, declaring in substance that an outbreak of the Chemehuevis and Piutes is imminent. A pot has been discovered by an agent who has been guarding the vicinity of Warren’s wells.

The Indians received instructions five weeks ago from Willie Boy, who is regarded by his tribe as chief, to move in small bands toward Nevada, where a tribe is to be reformed from remnants of Chemehuevis and Piutes. Willie Boy is to head an expedition into Nevada and establish his colony there. This information was obtained from an Indian girl near Warren’s wells, two days ago. Washington has been apprised of the gravity of the situation.

Twenty Piute Indians have escaped from Southern Nevada reservations and are working toward the willie boy country. Seventeen full-blooded Piutes with squaws, ammunition and provisions are also missing from California reservations between Banning and Daggett.

Three Piute women at Old Woman’s Springs remained by lighted fires all one night. At times they indulged in strange incantations and dances. They were observed by Under-Sherriff Wallace Evens, in their weird ceremonies. The meaning of the dance was not known until it was discovered that Piutes on the reservation in that vicinity and in Nevada were going through the same incantations, and that on the following morning able bodies braves were missing. It is said by an Indian woman at Warren’s Wells that this procedes the Piutes going on the warpath, and is called the war-paint dance.

Indians of Piute and Chemehuevis tribes have been hoarding stores for some time and these have disappeared, indicating that an outbreak has been systematically planned. News of the ordering out of the troops is momentarily expected, the authorities believe the murder of old Mike Boniface was only the first of a preconcerted movement, Willie Boy is descended from a celebrated Chemehuevis chieftain, known as Anger-of-the-Lightening, because of his violent temper.

Sheriff Wilson’s posse was near the place known as Rock Corral when the Indian runner left camp. Wilson was preparing to start out with thirty men, including those under command of Indian Agent Ben Decrevecoeur. The posse is expected to reach Willie Boy’s lair by tomorrow night. Wilson has spread his men out to pick up straggling Piutes and also to prevent possible poisoning of water holes. 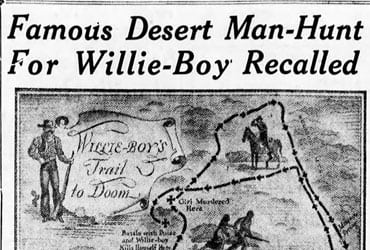 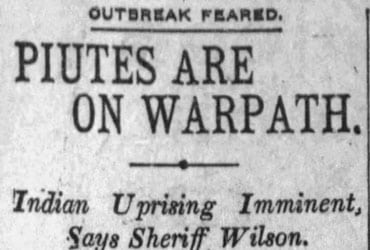 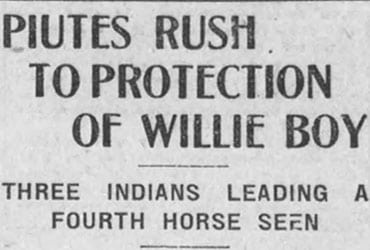