HOLLYWOOD–Taking movies on location is so big a business that a new town has sprung up to handle it.

A bunch of Hollywoodites run a clearing in the desert called Pioneertown where the chief thoroughfare is “Mane Street,” the hay barn is a sound stage, and half the buildings are false fronts.

The latest movie moviemaker the Pioneertown people enticed there was Gene Autry, who usually flies hundreds of miles to find backgrounds for his Columbia westerns. They persuaded him Pioneertown looked just as good as Arizona and was considerably closer.

The 30,000-acre tract is 4,500 feet high, 125 miles east of Hollywood and a few mountain ranges north of Palm Springs. The sign pointing from the main highway to the winding, pitching dirt road says, “This-a-way” and that gives you an idea what the whole place is like.

The cowboy actor Dick Curtis first discovered the rugged beauty of the rock-strewn mountain county and formed a corporation with 18 other Hollywoodites.

They put up establishments along the dusty Mane street with the flamboyant titles of the Golden Stallion cafe, Red Dog Saloon, Pioneer Duds and Saddlery, The Grub-Stake, etc. Behind these old-west fronts are hot dogs, soft drinks, nylons and truckloads of camera film.And a sign on the hay and grain loft says:

“Absolutely no admittance while the movie company is shooting. “

A sign at the entrance on Mane street tells you to leave your horseless carriage outside. The only wheeled vehicle allowed is a jeep which scrapes the street smooth so that tenderfoots won’t trip over their boot heels.

Autrey said the hills and ravines near Pioneertown where he made “The Cowboy and the Indians” were just like southern Arizona with their Joshua, yucca, saguaro, and mesquite. And it was handy being close.

He flew home for lunch one day. 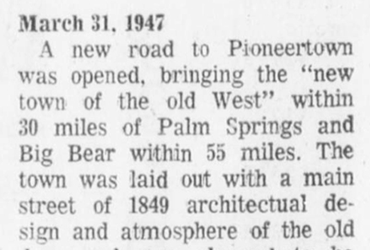 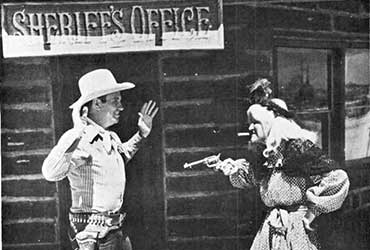 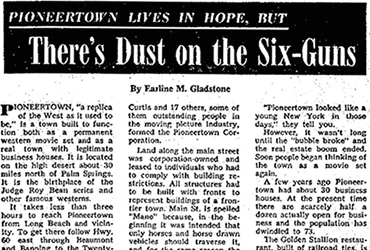